Coral reefs around the world are under threat from a wide variety of issues including  – overfishing, dredging, and rising sea temperatures. Satellites are being deployed to track and monitor many of these risks. 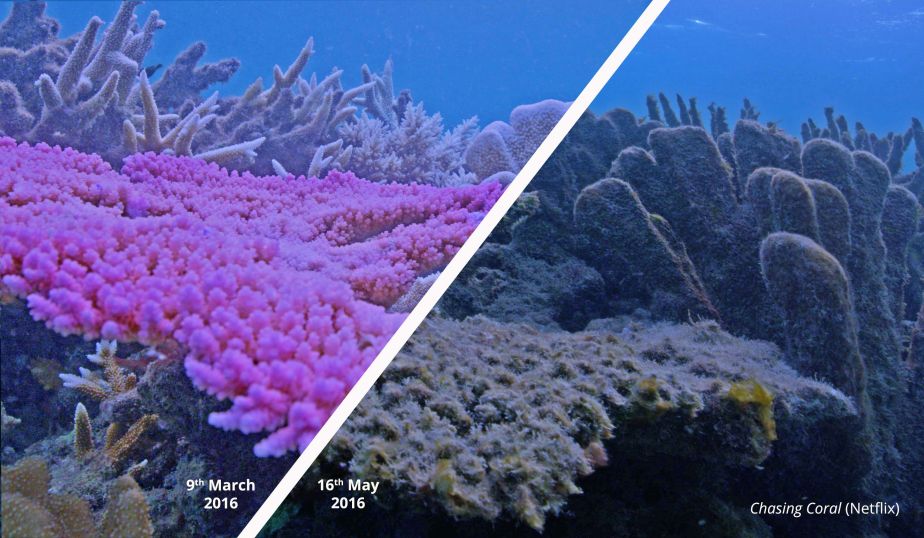 As coral reefs support 25% of marine species and over 500 million people depend on them for food or work – when they die it is devastating for plants, animals, and people globally.

Causes of coral bleaching:  When sea temperature rises, by as little as 1 degree C,  this causes corals stress. The zooxanthellae, which live inside the coral and give them their unique colours are then forced out of the coral, removing their colour – the “bleaching” effect. If Temperatures remain high the zooxanthellae will not be able to return to the coral and the coral will die.

The US National Ocean and Atmospheric Administration (NOAA) provides a service to monitor corals at risk of bleaching using satellites – with a daily, weekly,  and monthly outlook – predicting as far as 4 months ahead of time.

The chart below shows a 4-month outlook, animated with a weekly interval.

This data enables governments, reef managers, and the public to take action to help protect these reefs when they are most vulnerable.

Such actions that can be taken to protect coral before during and after a bleaching event, include:

The NOAA has two “missions” (satellite systems) that collect data from for this purpose, as well as working with international partners. The NOAA’s satellites are:

The GOES-R Series is a four-satellite program (GOES-R/S/T/U)  and will be in service until  2036. These satellites can provide the following capabilities as well as monitoring the temperature of the sea:

How Pollution Changed – When Lock Down was Lifted

When the COVID lockdowns came in spring 2020 the impact on cities was immediate. In the weeks and months that followed data showing how pollution changed was collate...
Learn more

Farming is often criticized for its environmental credentials – it consumes over 70% of the entire worlds freshwater supply, over 30% of the Earth’s land is taken up for crops - however – agriculture feeds over 7 billion people and employs over 30% of the entire global workforce – it is essential to human life.
Learn more

Deforestation is a challenge facing the entire world - technology can help.  Satellites, long used for military purposes but are now being used to protect the envir...
Learn more