NO2 Plummets During Lockdown in China

Satellite images from around the world have shown a dramatic reduction in NO2 (Nitrogen Dioxide) during the lockdown. The images of China (see below) show the immediate impact of reducing transport has on pollutants  – including NO2.

During the lockdown, the NO2 levels plummeted, in some areas by over 95% (with numerous reports and studies on this).  The images show just how dramatic that change is and therefore the effect on people’s health.  US EPA defines several bands for NO2 as:

In parts of China where the levels were over 500 (extremely unhealthy) it then dropped to below 100 (good) in a matter of days.

Similar changes have been witnessed around the world including Western Europe and Russia,

The reason that NO2 is so problematic is that it is associated with causing respiratory issues, as it impacts the lungs – especially acute in those with asthma, children, and the elderly – hence its important to track and monitor this pollutant.

Tracking NO2 on this scale can only be achieved by the use of satellites. Two of the satellite systems used for tracking NO2 are: 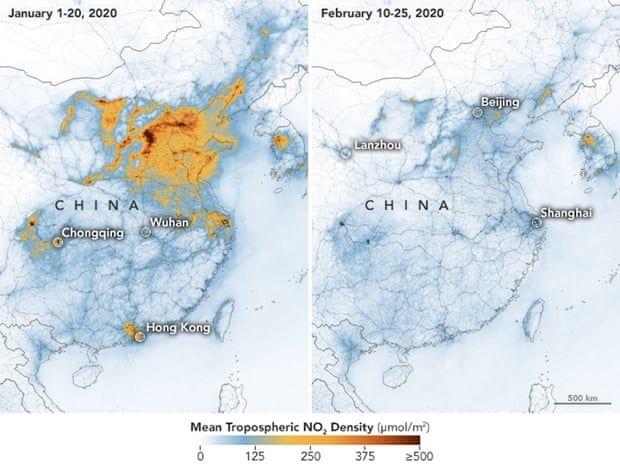 The changes in NO2 levels in China are well studied because of the dramatic effect seen every year during the Lunar New Year. In 2020 the impact was much more pronounced than in 2019 or previous years.

How Pollution Changed – When Lock Down was Lifted

When the COVID lockdowns came in spring 2020 the impact on cities was immediate. In the weeks and months that followed data showing how pollution changed was collate...
Learn more

Farming is often criticized for its environmental credentials – it consumes over 70% of the entire worlds freshwater supply, over 30% of the Earth’s land is taken up for crops - however – agriculture feeds over 7 billion people and employs over 30% of the entire global workforce – it is essential to human life.
Learn more

Deforestation is a challenge facing the entire world - technology can help.  Satellites, long used for military purposes but are now being used to protect the envir...
Learn more