Radar (RAdio Detection And Ranging) in its most basic form involves bouncing radio waves off objects and seeing what comes back.  By understanding the reflection from an objective, radar systems can understand an object and the world around it.

For example, if a radio wave was fired at two panels –  one 100m away and second 200 m, the reflection from the second panel would take twice as long to come back as the first. Measuring how the radio waves coming back is key to how Radar works. 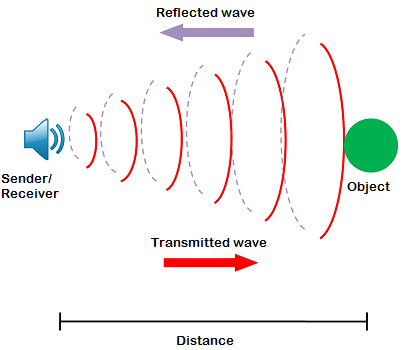 A sender/receiver in one location reflects waves from an object at some distance.

The ideas behind Radar were first considered in the late 1800s, but it wasn’t until the threat of World War II that drove the British to invest in new ways to detect aircraft. This push led the Scottish physicist Robert Watson-Watt to develop Radar.

Radar, in its earliest format, was bouncing radio waves off aircraft.

The “more” of the wave and the “faster” it comes back to the larger and closer the aircraft. In the 1930s radar could only detect aircraft 13 miles away,  by 1941 it was detecting aircraft at 132 miles.

Radar systems don’t just look at the time taken for the reflected signal to come back but look at several properties including:

As technology, sensors and computing power has evolved the ability to transmit a radio signal and then process the reflection has increased and the costs have reduced.

Most of us now use radar every day without even being aware of it: Cruise control for the car, automatic doors and highway monitoring. The weather predictions we see every day are based on radar images.

Many are not aware that some satellites are now equipped with radar.

The classic imaging from satellites is through panchromatic and colour images, where the colours may be in the visual range for ‘Google maps’ type images, be very narrow banded for studying things such as chlorophyll content, or outside the visual spectra to reveal details not visible to the human eye. Common for all this imaging is that we are looking at light from the sun which is then reflected off the surface of the earth. Because of this we get some limitations – we can only image during the day and when there is no cloud cover. Since we are typically interested in detecting change, we also require our satellites to be in a Sun Synchronous Orbit (SSO).

To avoid these limitations radar satellites do not rely on radiation from the sun, it transmits its own signals which are of a frequency that penetrate clouds (typically 1-12 GHz). Radar satellites make effective use of the phase information of the reflected signal. This permit measuring height and elevation to accuracies of a few millimetres and allows the detection of motion. This is possible because the transmitted signal has a high degree of phase coherence – i.e. all the transmitted waves are in phase.

To sum up the most important advantages of radar on satellites:

How it is done

Radar on satellites is implemented through a technique called Synthetic Aperture Radar (SAR).

The most basic form of SAR used fixed antenna, extended from the satellite that is directed towards the Earth. However, the antenna does not point directly towards the earth, but at a slight angle.  The reason for this is that allows for more effective analysis of the reflection – otherwise there would be too much signal coming back from the returning wave.

The satellite antenna is oriented so that the footprint is offset to the side of the ground track. This gives the best conditions for reflections of the signal to reveal the objects of interest.

The processing of the signal is done by both looking at the signals time of flight, as well as the signals Doppler shift which gives a small change in frequency of the reflected signal.

A satellite carrying a radar of this type, and which is frequently used by HSAT is the Sentinel-1.

Artist illustration of the Sentinel-1 satellite scanning the surface of the earth as it orbits. Credit: ESA

Detail generated by the radar satellites

The data collected by the satellites require complex processing on the ground to generate images. Sample images are shown below. 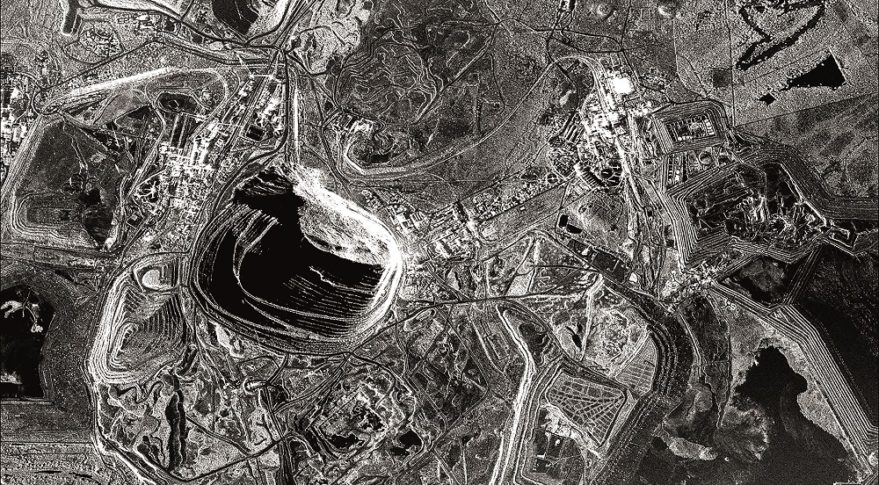 Open-pit mine in South Africa. Information with a high level of detail can be obtained on a regular basis to detect activity. The latter permits monitoring and predictions of unstable geology and landslides. Credit: Maxar 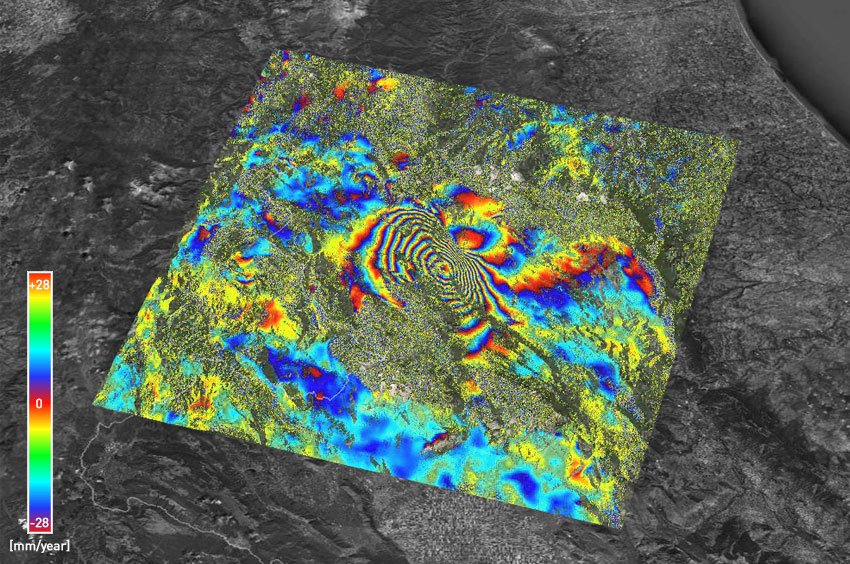 An interferogram derived from phase information in the reflected signal. The fringe pattern in this image represents ground displacement following the 2009 L’Aquila earthquake. This is measured in the unit of millimetres per year.