Revisit to detect a change – How long do I have to wait for an image and often can I have an update?

While a single image may contain a lot of information, many times we want to detect a change and hence we need two or more images taken at different times – we use revisit to detect a change. This could be to predict the yield of crops, tracking the amount of grain stored in an open pile, or detecting activity at an industrial facility.

A satellite for what we are interested in, whether it carries optical sensors, radar, or other types, does one revolution around the earth in about 100 minutes. So it would only be natural to assume that every 100 minutes the satellite will reappear overhead and be ready to capture new images. However, this is not generally the case, and to see why we must better understand satellite orbits.

There are unlimited ways in which to have a satellite in orbit, but for practical reasons, a very limited number are used. The most common type of orbit for earth-observing satellites is known as Syn Synchronous Orbits, or SSO for short. A satellite in SSO vill always pass overhead at the same local time, say at 10 am for example. This, however, does not mean that you can have a revisit and an image every day at 10 am, it simply means that where the satellite passes overhead it will be 10 am local time. The orbital mechanics forces an SSO to have a high inclination (the orbital plane is inclined vs the equator) and the orbit is commonly referred to as a polar orbit.

The orbital plane is more or less perpendicular to the equator and the satellite passes over the north and south poles on every orbit. Since an orbit is about 100 minutes, the satellite will repeatedly cross the equator on the solar illuminated side after 100 minutes. In this period the earth will have rotated 25 degrees and the satellite will be looking at a different location (the earth makes a full 360-degree rotation in 24hours = 1440minutes, hence 100 minutes = 25 degrees of rotation). The same thing happens on every orbit, the longitude where the satellite crosses the equator is shifted 25 degrees. For this particular orbit, it takes 72 full orbits and five days until the satellite crosses the equator at the same longitude. Note that this does not necessarily mean we have to wait for this long until we can again collect data from a specific location. Satellites can be angled in their orbit, and sensors have a field of view, so data can frequently be collected on an orbit that is not identical to the but comes close.

Since the satellites cross the polar regions every time and less frequently at the equator, it is easy to realise there is a difference in ‘coverage’ depending on latitude. Note that the exact repeat will not be any better at higher latitudes, but since satellites have a field of view and the track are closer further north we will be more likely to get data from our area of interest. The graphics below show Sentinel-1 revisit periods vs. latitudes. 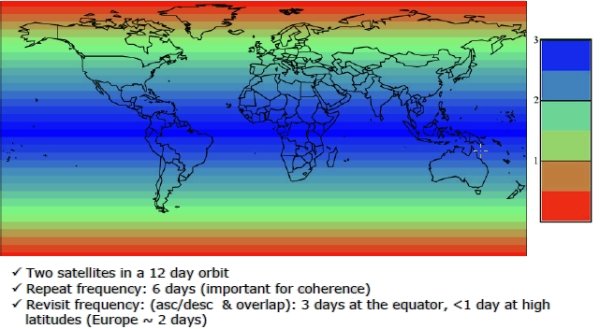 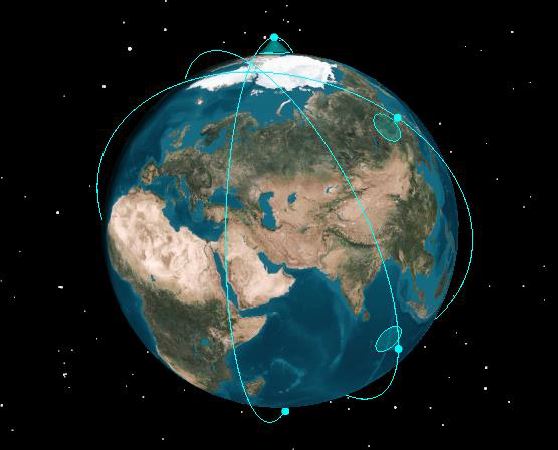